Johannesburg – England’s 3-1 series win over South Africa was a satisfying victory for all the Phoenix family members in the squad.

Ben’s heroic efforts with bat, ball and in the slips was rewarded with the Man of the Series award.

Joe cemented his position as captain and importantly, for England supporters, demonstrated that all is well with his batting.

Zak has quickly established himself as an England opener, forming a blossoming partnership with Dom Sibley. Zak also recorded his highest test innings to date, scoring 66 in the final test.

Stuart bowled with accuracy and guile, taking wickets at crucial moments. In the final test, he also added vital first innings runs with the bat.

Josh kept wicket with aplomb, and a big innings with the bat is surely around the corner. 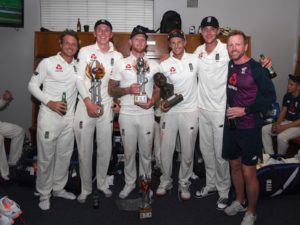