Our BBL 10 review looks at the performances of the five Pheonix family members playing in the 2020-21 KFC Big Bash. We highlight the performances of James Vince, Josh Philippe, Moises Henriques, Liam Livingstone and Joe Clarke. For each did their bit to help their respective teams to the BBL 10 final.

Call it ironic. Call it luck. All five players wore the shirts of either Sydney Sixers or Perth Scorchers, the two teams who fought out Saturday’s final at the SCG in front of 25,000 fans. 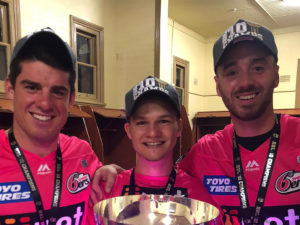 For the second consecutive BBL, Moises Henriques lifted the winner’s trophy. And, for the second BBL running James Vince and Josh Philippe were winning finalists.

In BBL 09, Josh took the Player of the Match award, this year the honour was awarded to James.

It was James who set the Sixers on the road to victory in the final. His 95 mixed cultured shots with rustic hitting to produce an innings worthy of any final.

His scoring was consistent throughout the tournament. In sixteen matches, he made double figures on twelve occasions including four half-centuries. James produced his two highest scores in the qualifier (98no) and the final (95), both scored against Perth Scorchers.

In total, James hit 537 runs in BBL 10. He finished second on the list of most runs scored in the tournament. During his sixteen matches, James hit 11 sixes and 59 fours, the highest number of fours scored in BBL 10.

For much of BBL 10 Josh headed the list for most runs scored, eventually finishing one place behind James in third. His total of 508 runs is a reminder how far Josh has come over BBL 09-10. His highest score during the tournament was 95 vs. Melbourne Renegades. In sixteen innings Josh scored three half-centuries. Along the way, he smashed 14 sixes and 55 fours.

Behind the stumps Josh took 15 catches and made 1 stumping.

Reported suffering from a hamstring strain at the start of the BBL 10 campaign, Moises returned to the team vs. Sydney Thunder on 22 January 2021.

He captained the Sixers in the last four matches of the tournament, including the qualifier and final.

In four innings Moises scored 155 runs, with a highest score of 56 against Sydney Thunder. In the field, he took five catches, three of those in the final.

Due to England duties, Liam was unavailable for the early rounds of BBL 10. He started the tournament slowly, scoring just 69 in his first five innings. Liam then exploded, the Scorchers opener hitting 357 runs in his next nine innings. His highest score (77) coming in the qualifier vs. the Sixers. In this nine-match spell, Liam hit three half-centuries.

Liam’s took 5 wickets for the Scorches, his best bowling figures being 1-10 off 2 overs vs. Brisbane Heat.

Joe was signed by the Scorchers as a temporary replacement for Jason Roy.

Joe made his BBL debut on 12 December 2020 vs. Melbourne Renegades. His highest score (34) came in his next match vs. Melbourne Stars. Joe played in one further match before the return of Roy.